Without question, Mercedes is again the dominant team in Formula One. They have the best cars, the best crews, the best engineers and the best drivers, led by six-time world driving champion Lewis Hamilton.

Evidently, there’s one area where there are sadly lacking and it’s a vitally important element to auto racing success. Mercedes is losing the rubber match to its closest competitors.

Tires are shredding on their cars and it’s threatening to endanger their chances of continuing their dominance of F1.

Hamilton and teammate Valtteri Bottas ran 2-3 behind Red Bull’s Max Verstappen in the most recent F1 race, the 70th Anniversary Grand Prix at Silverstone but tire blistering was a problem for both drivers.

Hamilton was victorious in the previous race, the British Grand Prix, also at Silverstone. However, he was forced to nurse his car to victory after suffering a puncture to his left front tire while on the final lap of the race.

“At the end, I was just driving with half a tyre basically. If you look in the mirrors, one half was bald and the other side was okay, so it held together. But of course, I was nervous it was going to explode or something.

His lead over Verstappen shrunk from 30 to seven seconds on that final lap but Hamilton was able to hang on for the win.

Hamilton compared the tires they ran on last week to balloons, feeling that tire maker Pirelli compensated for the issues of the previous race by overinflating the tires and creating other problems for the drivers.

Andrew Shovlin, the chief race engineer for Mercedes, didn’t try to dance around the issue or rationalize the problem when discussing the tire woes facing their team.

“We knew that blistering was an issue,” Shovlin told Motorsport.com. “We knew that last week. We know what sort of temperatures that it will occur at. And so that wasn’t news to us.

“What was news to us was we’re kind of at the very, very worst end of that problem. Right now, we don’t understand what the problem is.”

The persistent shredding of the tires in the Aug. 9th 70 Anniversary GP prevented both Hamilton and Bottas from pushing their cars to their full power potential.

Meanwhile, while Mercedes puzzles over their perplexing tire issues, Red Bull is savouring the sweet nectar of success. Along with Verstappen’s most recent win, they also seem to have a handle on tire management, something that clearly Mercedes does not.

If this issue persists for Mercedes, it not only threatens the ability of Hamilton to defend his world driving title, it might also potentially leave the seven-year run of Mercedes atop the Constructors’ Championship.

Hamilton remains the -1000 favourite at online betting sites to win the driving title. Mercedes is the overwhelming -25000 choice to retain the Constructors’ title.

Currently, Hamilton holds a 107-77 edge over Verstappen in the drivers’ competition. Mercedes heads Red Bull 180-113 in the Constructors’ Championship chase.

“Red Bull appears to be at the very best end of that spectrum,” Shovlin said of the tire concerns. “And that’s the thing that we need to understand because there have been other races where everyone’s been in the same boat, but why are we an outlier?

“Right now, we haven’t got the answer.”

If they don’t find it soon, bigger problems could present themselves down the road.

“We’ve seen Red Bull, they’re not that far off us in races, even when we’re looking at our best,” Sovlin said. “So I think, to be honest, if we don’t make progress, we’ll be in trouble there as well.” 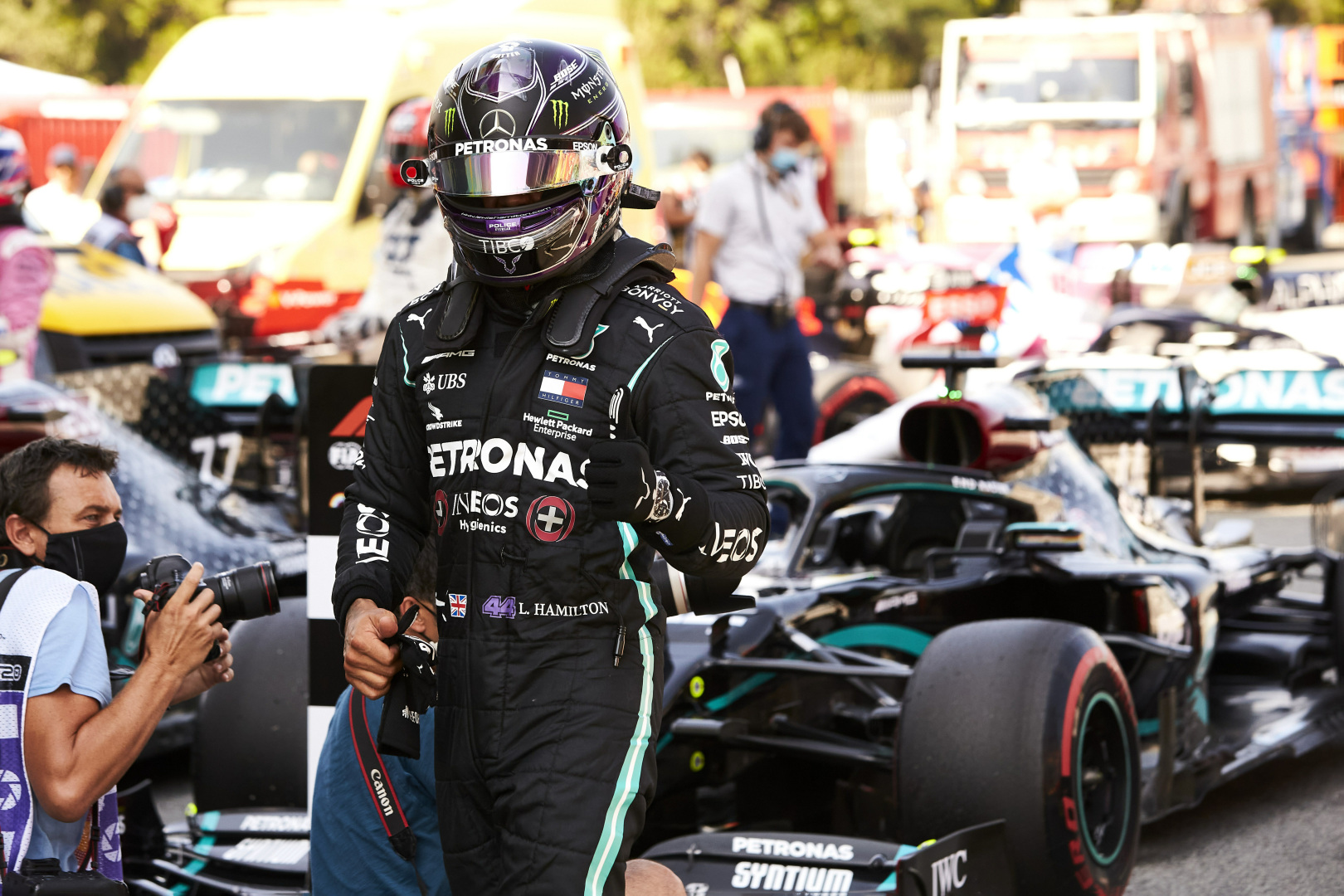 Turning Up The Heat

Heading to the 30-degree heat of the Spanish Grand Prix, blistering tires could again create havoc in the blistering heat.

“There’s an element of urgency here because we’re in Barcelona,” Shovlin said.

It may help their cause that the C1 tire, Pirelli’s hardest compound, will be employed in Spain.

“If we don’t solve it, you can probably hide from it a little bit on that C1 tyre,” Shovlin admitted. 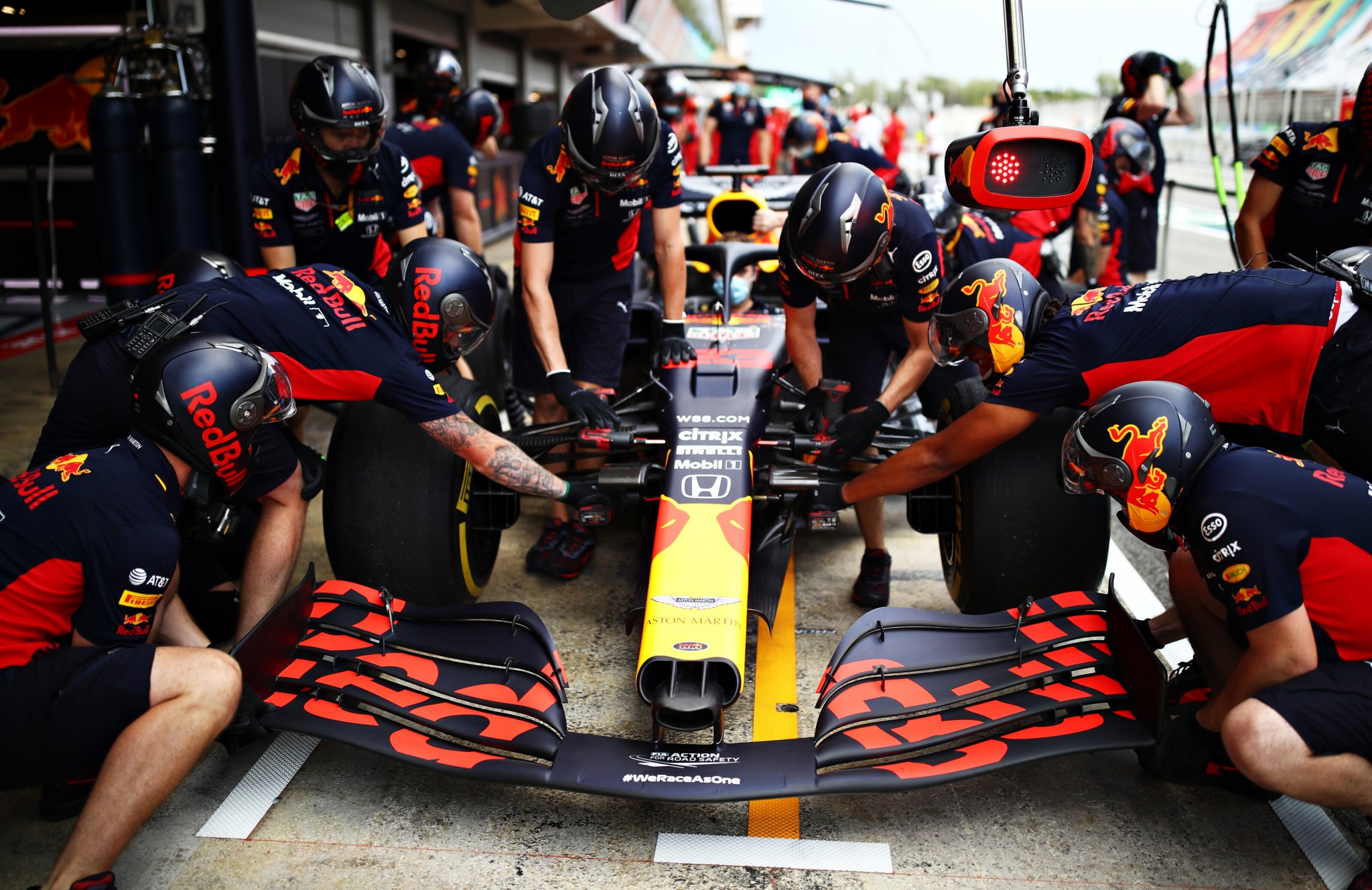 The Red Bull Racing team practice pitstops during previews ahead of the F1 Grand Prix of Spain at Circuit de Barcelona-Catalunya on August 13, 2020 in Barcelona, Spain. (Photo by Mark Thompson/Getty Images)

The post Can Mercedes Win The Formula One Rubber Match? appeared first on Paddock Magazine.